On June 23, Halifax Council unanimously passed HalifACT 2050, an ambitious climate action plan that aims to reduce the city’s greenhouse gas emissions to net zero by 2050. It is the first major climate action plan to be announced by a Canadian municipality during the pandemic.

“We were riding a high tide to bring this plan forward—and then COVID hit,” says Shannon Miedema, Energy and Environment Program Manager for the Halifax Regional Municipality. “I’m excited that the environment is not just dropping off the agenda like it may have in the past. We’re having good conversations on how to respond to both the pandemic and the climate crisis.”

The plan offers significant economic benefits. Under full implementation, energy costs are projected to drop by 62% by 2050, saving Haligonians $21.9 billion between 2020 and 2050. At the same time, investments in new low-carbon buildings, retrofits to existing buildings, and new clean energy infrastructure will boost the economy, generating an average of 5,500 person years of employment annually over the next three decades. The plan will also prepare the city to respond to climate change risks, such as increased flooding, severe storms, and heat waves. 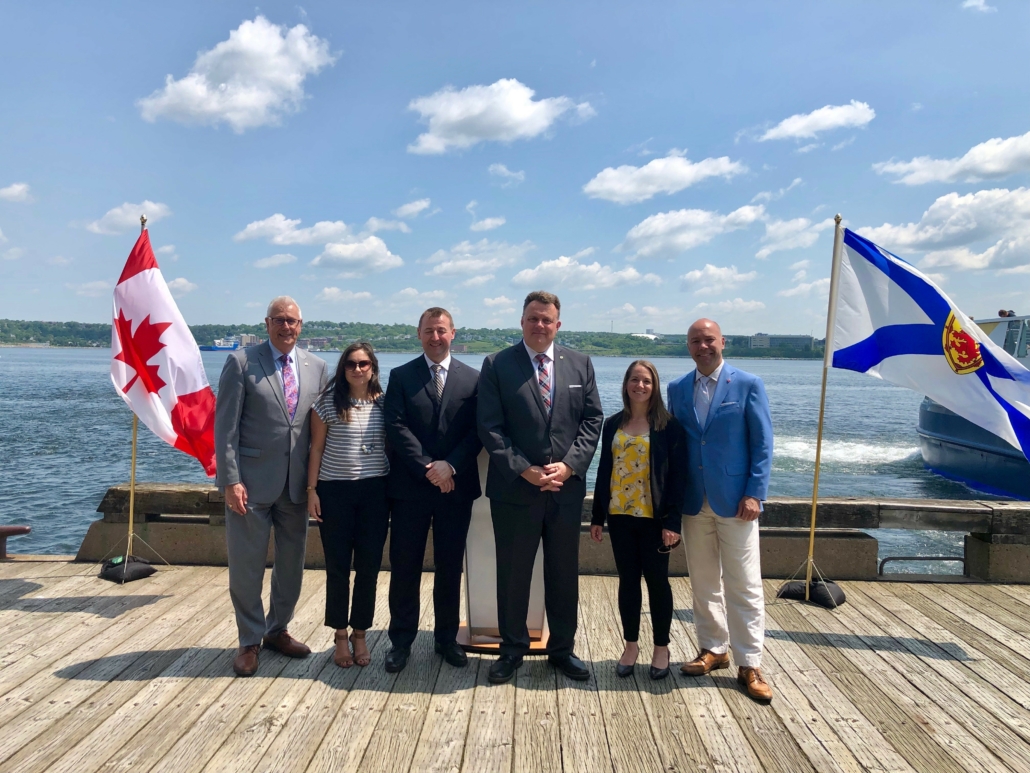 Shannon Miedema (2nd from right) with Halifax Mayor Mike Savage, Halifax MP Andy Fillmore, and others at a 2019 event announcing funding to support the development of low-carbon businesses in Halifax.

Miedema is one of the key people behind the strategy. She developed the project and led the team creating the plan, which was supported by technical analysis from SSG and whatIf? Technologies.

SSG sat down with Miedema to ask her what it was like to work on the plan during the pandemic and how climate action will shape Halifax. This interview has been edited for length and clarity.

SSG: How did Halifax continue prioritizing climate action during the pandemic?

Shannon Miedema: In those early COVID days, there was a lot of uncertainty. The municipality is run using money from property taxes and we were deferring those taxes. The financial outlook was pretty scary and it’s still not great. But our council and our mayor made climate action a priority. When they were able to start holding virtual meetings, they focused on things they considered to be the utmost priority. The economy and critical COVID things were on the agenda, but climate action was too. Internally, we [the Energy and Environment Team] continued telling our peers and managers we needed to move on it. The other thing is that we have an election coming up in October. We had a huge youth climate strike, so climate change will be an election topic. There was support from all different places.

SSG: How did the pandemic shape the plan?

SM: There was a period of uncertainty when we didn’t know when Council would review the plan, as everyone was managing the pandemic crisis. We used this opportunity to spend more time on the economics of the plan. We pulled more details from the technical analysis to highlight how it’s an investment into our future. We focused on the job creation and the economic opportunity to frame it as a plan that positions us well to recover from the pandemic. We also highlighted how the plan could help us get green stimulus funds that might be coming. We showed the lifecycle costs and benefits of diving into this 30-year ambitious plan.

A lot of the questions and nervousness about climate action comes from the dollars. Because everyone was feeling so devastated by the pandemic and a lot of people lost money, jobs, everything, we had to do it in a sensitive way. It was important to tell the bigger picture of the money to raise people’s comfort levels. Yes, it’s a high capital investment. But we’re winning in the end. We’ll have more money. We’ll be safer. And we’ll be working towards a better world.

SSG: What key challenges do you think Halifax will have to overcome to be successful?

SM: The emissions intensity of our grid in Nova Scotia is relatively high. It’s going to be the dirtiest grid in the country very soon as Alberta brings on more solar and cleans up its grid. Our plan is focused on improving energy efficiency and harnessing renewable energy technologies like solar panels to work around the fact that we have a very emissions-intensive grid. 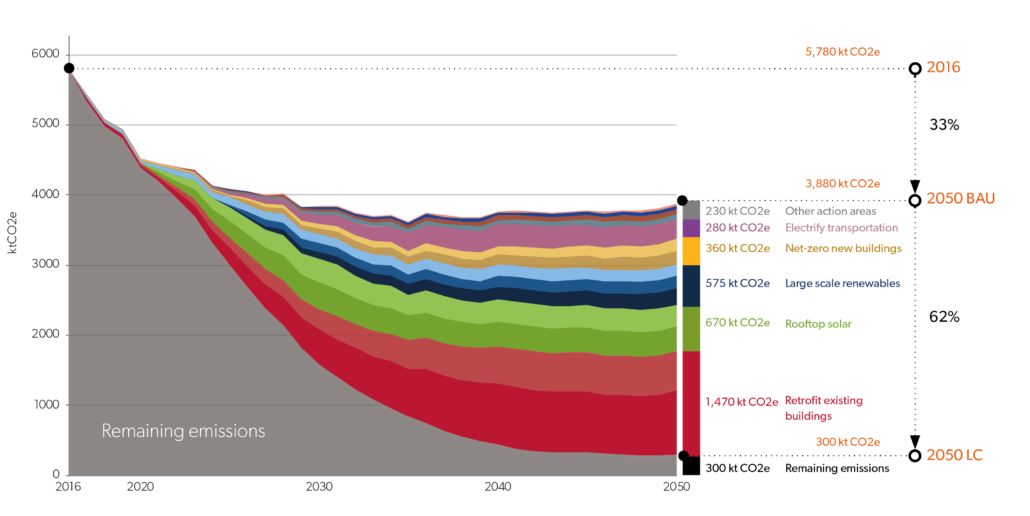 We have a centralized utility in Nova Scotia, and we burn a lot of coal and natural gas. The good news is they’re undergoing their IRP—Integrated Resource Plan—which sets out their key actions, priorities, and investments over the next 25 years. They’re considering a scenario in their modelling work that allows them to bring on more renewables faster. We need to analyze it more carefully, but it seems to align with our climate plan. If they go ahead with that, then we would experience even faster emissions reductions as we continue to electrify.

SSG: What are the key ways you expect HalifACT 2050 will transform Halifax?

SM: Halifax is one of the best mid-sized cities in the world, in my opinion. It still has its struggles—affordable housing, deep systemic inequities. Entire communities have faced environmental injustices throughout our municipality and our province. A great thing about climate work is that we’re working with an equity lens and a diversity and inclusion lens. When we start thinking about big transformative action, if we look at prioritizing our most vulnerable first and making sure we’re not excluding them in program design or policy decisions, that’s going to make Halifax better. If we can improve the health and well-being of our residents, then that’s great.

Second, we have a great network of wilderness, parks, and green space in Halifax. Council just made a decision to buy more land within the Blue Mountain Birch Cove area, which is a spectacular wilderness area in the city. Climate action strengthens the arguments for protecting this kind of land. In addition to supporting ecosystem health, wildlife, and human happiness and well-being, natural spaces are carbon sinks that help mitigate the consequences of climate change, like floods. Hopefully, we will have a very green city in the future, a happier, more resilient community.

Ideally, things will look different 30 years from now. Maybe we won’t have these giant red and white smokestacks on the Dartmouth waterfront. Electric vehicles will be everywhere. People will be more active and we’ll have more connected bike lanes. At the end of the day, it’s really about living in a place that you love, and being happy and safe. Hopefully, the climate plan helps with that, and we can help smaller municipalities in our province and in our region to make decisions on climate that work for them as well. 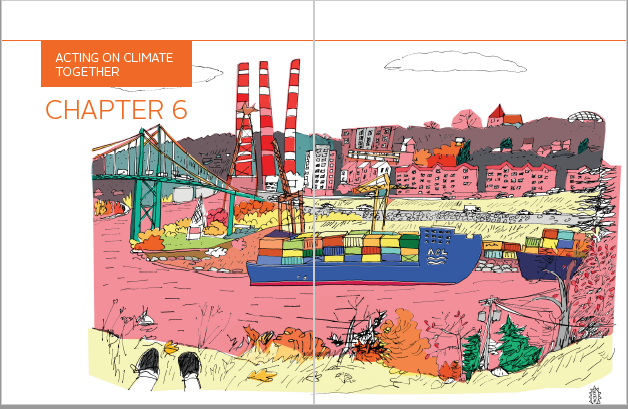 The full HalifACT 2050 Climate Action Plan can be found here. To get in touch with us about how we can help your municipality reach net zero while contributing to the economy, contact us here.