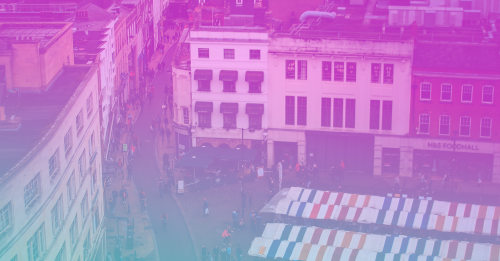 LONDON, MONTREAL, NEW YORK, and VANCOUVER, Dec. 17, 2020 [Press Release] — Five years into the Paris Agreement—and in the lead-up to the 2021 UN climate negotiations in Glasgow—UK cities are taking bold climate action. Cities worldwide have much to learn from their UK peers’ successes and challenges, according to a new report released Thursday by the 1000 CITIES Initiative, which aims to mobilise 1,000 cities to respond to the climate crisis.

“Leading British cities are responding to the climate emergency by moving forward with effective and innovative climate policies, including ambitious targets, carbon budgets, and unique approaches to community engagement,” said Rebecca Foon, co-founder of the 1000 CITIES Initiative. “Other cities should take note of their approaches to cutting carbon emissions. Communities around the world need to accelerate climate action to hit the Paris Targets.”

UK cities have some of the world’s most ambitious climate targets, with many adopting goals to reduce their greenhouse gas emissions to net zero by 2030, according to the 1000 CITIES Climate Action Best Practices in UK Cities report. In contrast, many leading North American cities have action plans that aim to reach the same goal by 2050. Others are planning for an 80% or smaller emissions reductions over the next three decades—an aspiration that we now know will not prevent dangerous levels of global warming.

“One of the key messages which Glasgow is issuing to the world as host city for COP26 is that it is cities which are leading on the delivery of national ambitions for a low-carbon and climate resilient future,” said Duncan Booker, Chief Resilience Officer and COP26 Stakeholder Manager at Glasgow City Council. “It was our cities that generated the first industrial revolution and it will be our cities that lead a just transition to a greener, cleaner economy and society.”

One notable strategy that has enabled British cities to set ambitious targets is their approach to community engagement, according to the report, which is based on research on 12 UK local governments, including Birmingham, Bristol, Cardiff, Glasgow, Hull, Leeds, Liverpool, London, Manchester, Newcastle, Oxford, and Somerset. The research was carried out by Sustainability Solutions Group (SSG), a leading North American climate planning consultancy, and funded by the Rothschild Foundation, a UK-based charitable trust focused on the arts and humanities, the environment, and social welfare.

“Almost every city we studied had some sort of community coalition or engagement process that brought together charities, businesses, academic institutions, and other local groups. The communities collectively took ownership for climate action,” said Julia Meyer-MacLeod, Principal at SSG.

“In some cases, the community coalitions themselves were responsible for or even helped to write the local climate action plan,” added Meyer-MacLeod. “This not only gave Councils confidence to pass ambitious climate plans, but enabled cities to hit the ground running with climate actions that were pre-approved by local industry and community groups.”

For example, in 2019, Oxford became the first city to create a citizens assembly on climate change. The assembly, which was livestreamed on social media, brought together a group representative of the City, including members from all major political parties, climate and social scientists, business sector representatives, and community organisations. These citizens identified a widespread desire for Oxford to be a leader in tackling the climate crisis, prompting the City to commit an additional £1,040,000 to its climate action efforts and laying the foundation for it to undertake one of the most ambitious smart grid trials in the UK.

Applying a “climate lens” to all Council decisions is another best practice highlighted in the report. More than half of the 12 cities featured in the report have implemented a climate lens. The City of Leeds, for example, requires all reports to Council to provide details on the climate implications of proposed decisions. In addition, a report is presented at each Council meeting outlining progress towards emissions reduction targets.

“Climate lenses help to ensure that councils stay accountable to their climate pledges,” said Meyer-MacLeod. “Leading cities have also taken their accountability measures to the next level by creating carbon budgets that set a cap on how much greenhouse gas they can emit—ever.”

More than half of the 12 local governments have implemented or are considering carbon budgets, which set annual, declining caps on GHG emissions, aligned with the Paris Agreement target of limiting global warming to 1.5°C above pre-industrial levels.

“By implementing carbon budgets, cities like London, Manchester, and Oxford are doing their part to significantly limit the severity of extreme heat, sea level rise, and other effects of global warming,” said Meyer-MacLoed. “It is critical for cities around the world to follow their lead to limit catastrophic climate change.”